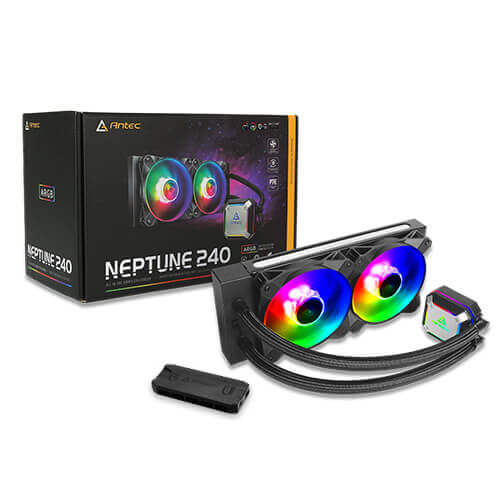 The new generation of Antec all-in-one liquid CPU cooler, the Antec Neptune 240 AIO ARGB Liquid CPU Cooler, brings your build to the next level. The integration of the water pump and radiator prevents the CPU from being damaged by vibration. The ultra-thin pump head reduces the volume when installing it on the CPU. Besides the aesthetics, the efficiency of thermal control is also improved

The super-thin CPU block not only avoids incompatibility with certain motherboard heat sinks but also protects the motherboard from deforming due to the weight of the CPU cooler. The water pump is located on the top of the radiator, highly decreasing the damage to the CPU caused by the vibration. PTFE tubing reduces liquid loss. It also resists corrosion and ageing.

The ARGB LED-Lit PWM fans cool your CPU with a highly efficient dissipation of heat. The various motherboard sync technologies supported by the Neptune 240 allows you to sync the ARGB lighting with the motherboard and have fun. Create various visual effects by the abundant ARGB lighting effects synchronized across all the compatible components.